Cleaning the site of the future school 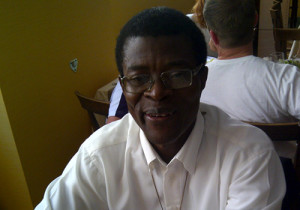 Born in Agoué March 13, 1969 of humble family originally animists and parents, Father Gregory Adouayi was ordained in 2000 and sent as a priest “fidei donum” («gift of faith” as the encyclical of Pope Pius XII April 21, 1957) the diocese of Djougou including Bishop Paul Vieira, welcomed him. To be close to people and help them, he started to learn the language Yom. Vicar at the Parish of Saint Joseph Alfa-Kpara he showed particular love for missionary children and for families. After three years of ministry, he was sent to Burgos in Spain in 2004-2008. He made a thesis entitled “Eucharist and Mission as Therese of Lisieux.”

His missionary vocation, it must first to the first missionaries who gave his life to the evangelization of his country. Tiny, he was touched by their graves in the cemetery of his hometown Agoué where his parents brought him to Mass on Sunday! Then his missionary vocation will grow when he met the seminary St. Teresa’s life Lisieux. But in reality, it is thanks to his older brother missionary Bishop Paul Vieira that he discovered his missionary vocation to develop its great missionary spirit: to love is to give everything and give yourself! When you love it does not compute! the measure of love is love without measure! Everything for the Mission at the mercy of Providence!

Going back in history, the birthplace of Father Gregory, the small village of Agoué is a land blessed by God … Lord, you loved this land! Agoué was one of two key villages in the history of the evangelization of Benin Ouidah with it 150 years ago. There are 29 tombs of early missionaries to Agoué … Their presence is an eloquent missionary Silence!

While at Burgos, Father Gregory was invited to Navarrenx by Vasti family. The latter is a missionary family friend of a missionary, Father Michel Iriquin of the Society of African Missions currently serving in the parish of Saint Joseph Kolokondé in the diocese of Djougou. The friendship of the two priests with Vasti family Castenau-Camblong will become a sign of the multiplication of graces, a source that extends to several other families. Aldo and Yvonne Vasti have lost their little girl, Marianne accidentally died at 19 when she wanted to go to Africa !!!

A priest never saw his own mission. He must live in communion with the Church through his bishop. Father Gregory believes his summer assignments among Navarrenx as a missionary witness of exchanges between churches.

It was during one of his missions, and Chantal Stéphane Charruau made the acquaintance of Father Gregory. It was in August 2011 at the Church of Navarrenx. It is from there that began as friendship with Heloise reminded of God October 31, 2010, aged 25, after 7 years of struggle against cancer. Father Gregory read the testimonies book on the brief life of Heloise. This book reflects the communion of saints and sealed the friendship between Father Gregory and Heloise. Then Father Gregory wished that Héloise can achieve something in Benin for his little sisters and little brothers of the Saint Joseph of Alfa-Kpara missing frames for school education ….

The Diocese of Djougou was created June 10, 1995 by Blessed Pope John Paul II. This is in recognition of this good servant of the small diocese of Djougou dedicated his Catholic college friend to Pope Youth.

Father Gregory is Director of the John Paul II College and pastor of St. Joseph of Alfa-Kpara with over 29 300 inhabitants Communities at least 15 km Djougou and connected to it by tracks. Its mission is dedicated to the children of this country, I quote, according to the saying of Christ which is the episcopal motto of Bishop Paul Vieira: “That they may have life and have it more abundantly.” He wants to communicate this missionary zeal of Christ.

And has he said, no school no hope, no future for Benin, for our families. Public education does not help children to be well trained. Many children do not go to school and many are discouraged by the poor quality of education that is offered. The parish of Father Gregory mid predominantly Yom still feels a great need for the school to educate and give children a good base level of primary education. Almost all the villages of his parish, there is great pain at the neglect that occurs in primary school. It would really do something for the children, his friends who are the future, hopes to change the mentality and the fight against poverty and ignorance. So, education is top priority Bishop Vieira. The focus is, among other priorities on girls, targets poverty especially in adolescence as they succumb to the throes of unwanted pregnancies and forced marriages.

Currently in the parish of Alfa-Kpara, Father Gregory works with two other priests “fidei donum”. They engaged in this Year of Faith in the education of children by initiating in one of the buildings of the parish elementary school for children of all their lands and villages, girls and boys and children of every condition.

–
NB: In October 2015, Father Gregory Adouayi was appointed head of Djime seminar in charge of 188 seminarians with 7 trainers priests.

This great moment of inauguration of this majestic Module began with a Mass celebrated by the parish priest of Alfa-Kpara, Father Gregory ADOUAYI and concelebrated by two vicars of the parish.

At the beginning of this Mass, participants were treated to a brief summary of the life CHARRUAU Heloise. Father celebrating tried to show the similarity between the life of Abelard and that of St. Therese of the Child Jesus, patroness of the diocese of Djougou.

The children’s choir of the parish of Alfa-Kpara graced the participants of a beautiful animation.ation.

As the celebrants, the participants were really attentive to the liturgical texts of the celebration.

The nuns in charge the administration of this school took an active part in preparing and holding this ceremony.

A moment of homily who soon took the shape of a thank occasion of the different actors involved in the realization of this project, including the parishioners, the Diocesan Caritas of Djougou, the Foundation Caritas France and Heloise CHARRUAU Foundation

MOMENT OF ENTHUSIASM AND CURIOSITY FOR CHILDREN :

Children, not only those attending school, but those of the parish and village of Alfa-Kpara were associated with the event and dressed in T-shirt that read “Saint Joseph Catholic School Alfa -Kpara “.

obviously happy to witness this great event and to integrate a brand new module for children.

Parents do not stay on the sidelines of the event. They were present, a sign of their gratitude to the contributors to this project.

The maternal gaze did not fail in this ceremony.

It was also important moment of the ceremony, punctuated by prayers you to answer

After the moment of prayer, the whole building was sprinkled with holy water.

CUT RIBBON SYMBOLS: THE MOMENT AS WHEREAS :

ribbon cutting by the parish priest and sister school principal.

Happy children to perform this special return of 24 December 2013.

A change of educational environment. Each child wanting to be the first to sit on these new tables and benches.

This new educational environment certainly raises in their minds the desire to be better.

The folk group invited for the occasion held in suspense all the participants in the opening ceremony.

The end of the ceremony was also a time of popular rejoicing.

CONCLUSION:
To see the enthusiasm of children and parents, it could be argued that the inauguration of this module of 4 classes at the Catholic school St. Joseph of Alfa-Kpara augurs a better future for these children, hopes for tomorrow.